Several employees from Topcon traveled to Japan to help with the cleanup efforts from the March 2011 earthquake and tsunami. 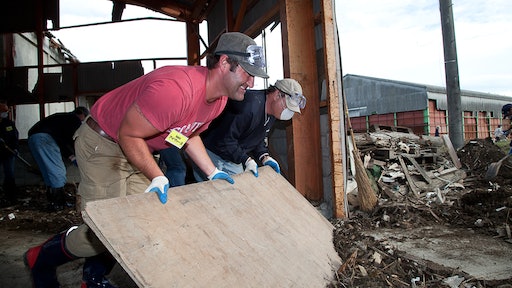 For Topcon Positioning Systems (TPS), located in Livermore, CA, a subsidiary of Topcon Corporation headquartered in Tokyo, Japan, the amount of work needed for Japan to recover from the March 11, 2011 earthquake and ensuing tsunami disaster was fully realized by a group of employees who volunteered to help in cleanup efforts.

The opportunity to assist was through TOGETHER - Japan Relief Volunteer Program, a partnership project of the Japan Travel Bureau (JTB) USA and Delta Airlines to support the Tohoku Earthquake and Tsunami victims. The partnership encouraged volunteer groups and individuals to visit Japan for the purpose of participating in volunteer activities. The tour, which was open to the U.S. public, ran September 29 to October 5.

Yamazaki says, “A lot of inquiries about how to help Japan had been raised by employees inside TPS. Other than the relief money that the company and individual employees contributed, people were seeking a way to physically help. Then I came to find that the JTB, a company we do business with, was considering the Japan Relief trip for people in the U.S. This was the perfect match for us.”

Cleanup Support
The Topcon employees, along with other volunteers to the program, were assigned to the cleanup of a wood chip factory in Tohoku. The factory helps support the local paper mill that in turn supports construction projects and recovery for the area. “The wood chip factory plays an integral part of getting the economy started and we were helping the recovery efforts by physically ridding the factory of debris so it could be operational,” Yamazaki says.

“Only a few shovels were provided,” Topcon volunteer Mike Tibbit says, “so our team improvised methods for moving the various materials. Sheets of plywood became human-powered bulldozers and plastic buckets were used to carry flood sediment. Everything was stacked to be hauled away. I was overwhelmed with the magnitude of destruction we witnessed. The amount of work that had already been done in the cleanup efforts was enormous but was dwarfed by how much was left to do.”

Brabec says, “Pictures from afar cannot do justice to the amount of devastation we saw firsthand – this after months of cleanup by others before our arrival. But the determination of the volunteers to make a difference came through even in the first day, as we completed the cleanup of our first building in about 90 minutes, totally catching our hosts by surprise.”

Topcon volunteer Steve McCain says, “Once we gained momentum, and a few tools, we began to make real progress and did not want to stop for lunch breaks. We would have been happy to work additional sites if they would have allowed it.” Brabec adds, “We completed more than they had scheduled for us, totally destroying the pre-arranged schedule and leaving all the volunteers with a feeling of accomplishment.”

Social Support
In addition to volunteerism through assisting in cleanup efforts, the program was designed to encourage social volunteerism. To this end, the group made a visit to an orphanage near Tokyo, meeting with the principal who took the group on a tour, showing damage from the earthquake as well as explaining the mission of the facility and its staff. The group provided gifts to the children and played with them in the orphanage gym. Topcon volunteer Ande Doria, says, “It was so nice to see the kids' joy when we visited the orphanage, knowing a few of them were directly or indirectly affected by the tsunami.”

TPS volunteer Eric Ivers says, “From the site cleanup we performed as a team, to the time we spent with the children at the orphanage, to the time spent on the bus witnessing the mass devastation, all were parts of the overall experience that will not be forgotten.”

Appreciation
About the trip and efforts of the participants, Yamazaki says, “The last day of the trip, Topcon President Nick Uchida presented the group with a letter of appreciation for what we had done. The Japanese people appreciated our physical effort but also acknowledged the 'heart' the group showed by coming to Japan."

Yamazaki says, “Thinking about doing something is easy, but action is not easy. I was impressed with the people's never-give-up attitude that we saw in Tohoku during the visit. The TPS employees showed a real passion for the recovery effort. Members of the Topcon family worked very hard along with other volunteer groups that were there. The Japanese people were very appreciative of our presence.”