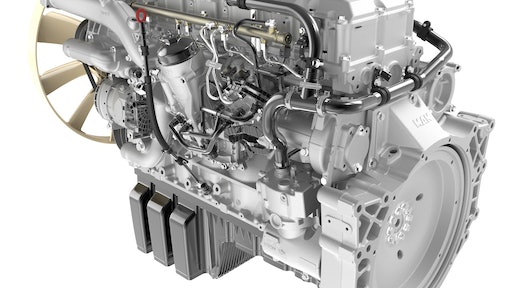 MAN Engines is debuting its new straight-six, 145 mm stroke, 115 mm bore engine at Agritechnica, the MAN D1556, which has applications in agricultural machinery. With a power unit that has been developed from the ground up, MAN Engines is making a foray into the 9.0 L class and, with power ranging from 205-324 kW, is narrowing the power class between the established MAN D0836 and D2676 Series, with engine sizes of 6.9 L and 12.4 L, respectively. There are many ways in which the new MAN engine represents a forward-thinking approach. First, its high power density, despite a compact and lightweight design, and the optimal torque and performance profile alongside extremely low fuel consumption. Secondly, the D1556 particularly excels due to its high potential for integration in agricultural machinery as well as its countless individual solutions for machinery manufacturers. This is because, with the D1556, MAN Engines is offering OEMs not just power and torque, but also significant added value to leave the competition behind. Reiner Rößner, Head of Sales at MAN Engines, states “We want to offer our customers an engine that enables them to market their machine as a premium product.”

MAN Engines supplies highly customised solutions for the integration of engines into machinery so that engine properties match up seamlessly with use and load profiles and therefore machinery manufacturers ultimately gain a competitive advantage. These solutions may be mechanical such as lightweight plastic oil sumps or oil sumps with a load-bearing structure, electronic adjustments through the interaction of engine components (Engine Device Control) or features that are strongly mirrored in the machine’s design, such as electronic immobilisers. The modern architecture of the controllers also enables the software to optimise wildly varying torque and power characteristics as well as complete integration into the machine. In addition, diagnosis functions that are relevant to the engine can be depicted clearly and integrated into the customer’s own systems. What’s more, auxiliary units such as alternators, air-conditioning systems and air compressors are kept modular so that they can be optimally arranged for different assemblies and customer interfaces. Up to three power take-offs may also be used, for hydraulic pumps for example.

With the MAN D1556, the engineers at MAN have developed a new diesel engine that is characterized by its high degree of reliability. The reason for that is MAN Engines’ decades of field experience with various assembly situations and load profiles in the off-road sector as well as the transfer of knowledge about other MAN engines to the latest generation. Established materials and field-tested technology from MAN’s commercial vehicle engine production line equally ensure that both quality requirements are met and that development and production are kept in-house at MAN, in its International Engine Competence Centre in Nuremberg. Furthermore, design features such as exhaust system insulation measures offer advantages when used under hot and dusty operating conditions. The less complex engine without exhaust gas recirculation (SCR only) assists reliability, as does a control system for the exhaust gas aftertreatment system, which is fully integrated into the EDC control unit. Downgraded versions are more sulphur-tolerant and can therefore be deployed all over the world, including in countries with a diesel sulphur content of up to 2000 ppm. This facilitates secondary marketing efforts in non-European countries that tend to have higher diesel fuel sulphur contents. Service options such as extended warranties offer greater convenience in customer service. A proven and close-knit global MAN service network and international on-site assistance provided by MAN's own engine specialists are available in cases where service is required.

Depending on performance class, thanks to a high ignition pressure and 2500 bar injection pressure, the MAN D1556 manages to generate between 205 and 324 kW of power (279 and 440 hp) from an engine size of just nine litres and thereby generates a maximum torque value of 1970 Nm between 1150 and 1300 rpm (324 kW). Not only that, but with a dry weight of just 860 kg (without exhaust gas aftertreatment), the MAN D1556 is the most lightweight engine in its class and has one of the lowest installation volumes when compared to the competition (1414 × 807 × 1103 mm [l × w × h]). The MAN D1556 simultaneously achieves the most economical consumption values in the entire engine-map range thanks to its modern design. The new MAN engine thus offers the perfect building block for machinery manufacturers to bring powerful and fuel-efficient machinery to international markets, e.g. self-propelled harvesting machinery (combine harvesters) and tractors, chaff-cutters, shredders, forest machinery and recycling machinery.

The MAN D1556 is impressive even at low engine speeds thanks to a high torque value, with “turbo lag” being eliminated at low engine speeds. A positive side effect of this is that low noise emissions are also retained. Its high power and torque capacity consistently ensures the delivery of dynamic power, even at lower engine speeds, a particularly critical feature for economical operation. These ideal performance conditions are achieved thanks to a Common-Rail-System with a maximum injection pressure of 2,500 bar and a turbocharger with variable turbine geometry (VTG). This technology allows the most efficient engine operating range to be customized to perfectly match an extremely wide range of applications. High compression also ensures more efficient fuel consumption. In the synergy between the integrated interaction of engine components (EDC - Engine Device Control) and the Common-Rail-System, thanks to the optimal balance between charge pressure and the quantity, pressure, timing and duration of injection, the conflicting objectives of lower fuel consumption and reduced emissions of pollutants are combined for the best results possible. Other advantages offered by the VTG turbocharger are its compact dimensions compared to two-stage turbochargers and its increased brake output without the use of additional components such as a brake flap or valve brake.

The customer can of course choose between various performance classes and, depending on the target market, choose the exhaust gas aftertreatment system that is right for them. MAN’s D1556 meets the most recent emission requirements such as the Euro Stage V and US Tier 4 emissions standards. At the same time, the new engine from MAN also provides opportunities to set limits with greater ease and at a lower cost for countries with less stringent requirements, in line with EU Stage IIIA/IIIB. The basis for this is the modular exhaust-gas aftertreatment system from MAN Engines, which has a wide range of replaceable components and packaging options. These stem mainly from the two component groups DOC/DPF (diesel oxidising catalytic converter/diesel particulate filter) and SCR (Selective Catalytic Reduction) with mixers for EU Stage V and US Tier 4. For the emissions downgrade to Stage IIIA/IIIB, for countries with emission standards that deviate from these, only the component group with SCR is used. This flexible system enables manufacturers of off-road machinery to offer their products around the world without having to change the installation conditions for their basic engines. An SCR-only system without separate exhaust gas recirculation is generally used for the D15 engine, which saves space and reduces system complexity. The cooling of the exhaust gas from around 500 C down to around 70 C, something that the EGR module usually has to perform, is no longer an issue. As a result, less cooling output is necessary and a smaller cooling system can be installed. The lower cooling requirements mean that a less powerful fan can be installed, thereby increasing the system’s overall efficiency. The airless injection of the carbamide solution also cuts down on space and technical complexity and thus reduces the volume required to install a system that was already flexible in this regard.

MAN Engines will be attending Agritechnica in Hanover from November 12-18, 2017 (booth C45 in hall 16) to showcase its new products. These include its D1556 off-road engine and the MAN E3262 gas engine with 450 kW mech of power for CHP, which is also new. MAN Truck & Bus will also present a special agricultural truck that demonstrates the versatility of trucks in the agricultural sector.

The DC13 166 offers fuel savings of up to 2% and is suited for weight-sensitive applications where solid power is crucial.
Scania AB
August 16, 2019

Debuted at bauma China 2018, the Cummins 8.9-L engine provides up to 400 hp and is dual certified to both EU Stage V and China Stage IV emissions requirements.
Cummins Inc.
November 27, 2018

During Agritechnica, MAN introduced its 9.0 L D1556 engine with a modular aftertreatment system that can be modified to comply with various emissions regulations.
MAN Engines, a Business Unit of MAN Truck & Bus
November 15, 2017

Scania's new gas engine provides a power output of 410 hp and can be used both for long-distance transport and construction-site movements.
Scania AB
November 8, 2017

FPT's new Cursor 13 NG engine delivers up to 460 hp and is capable of running on CNG, LNG, methane and biomethane.
FPT Industrial
November 1, 2017

The Volvo D13TC utilizes turbo compounding technology that recovers energy typically wasted through the exhaust, converting it into usable mechanical energy that is transferred back to the engine.
Volvo Trucks North America
July 18, 2017

DEUTZ will introduce its TCD 9.0 diesel engine with a power rating of 300 kW and a compact design for installation in various applications at bauma China 2016.
DEUTZ Corporation
November 21, 2016
Follow Us