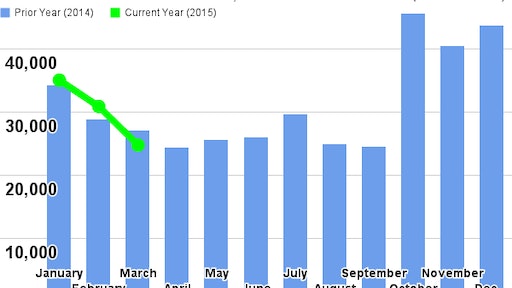 The Class 8 order rate is reverting to more stable and predictable patterns with the expectation that most of the March orders will be for Q2 and Q3 deliveries. Backlogs are still high enough to support the current 2015 FTR forecast. Most OEMs experienced a noticeable drop in orders this month, however one OEM saw a respectable increase.

Don Ake, FTR Vice President of Commercial Vehicles, comments, “It is not surprising that orders fell to this level in March. Many fleets already had their requirements in for 2015, and there is no advantage at this point to begin ordering for next year. The market has cooled down from the torrid pace of Q4 and is trying to find its equilibrium point. We could see orders dip below 20,000 in the summer, but this will still be a great production year.”

Final data for March will be available from FTR later in the month as part of its North American Commercial Truck & Trailer Outlook service.