The OEM Off-Highway team is back out on the road for conferences and trade shows in the heavy equipment industry. 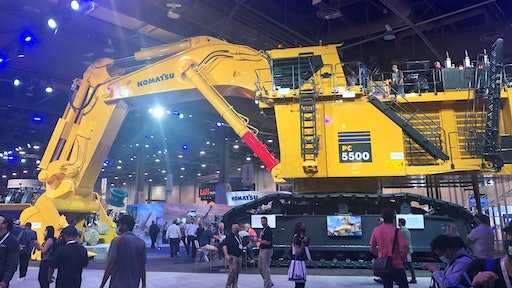 MINExpo was one of the first large trade shows the OEM Off-Highway team has attended since early 2020.
S. Jensen

Travel season is back in full swing for the OEM Off-Highway team. After over a year of not getting out into the industry, we now have several media events, conferences and trade shows filling up our schedule for the remainder of the year.

Since mid-August, travel has been going strong for us. First on the docket for me was a media event with ag OEM Fendt in which the company highlighted some of its latest farming equipment and technologies. Among them was the Rogator 900 Series applicator which Fendt announced it is bringing to the North American market. Per a news release from the company, the self-propelled applicator adjusts between standard and high clearance with the push of a button and converts from liquid to dry application and vice versa in as little as 2 hours.

Read more about these and other machines and components exhibited at this year's Farm Progress Show.

During its media event, Fendt also provided a look at the next generation of its Xaver robot for planting and field documentation. The autonomous concept machine is designed to operate as part of a swarm through fields in an effort to help improve productivity for farmers. Such concept machines will become important in agriculture and other similar off-highway equipment industries to help overcome the labor challenges many of them are facing.

Listen to my podcast interview with Andrew Sunderman, Senior Manager of Global Farming Systems at AGCO, to learn more about the Xaver robot concept.

Next on the docket for our team was the National Fluid Power Association (NFPA) Industry & Economic Outlook Conference. This annual event provides insight into current and future trends for the fluid power industry, as well as the heavy equipment and industrial markets it serves.

The biggest show for OEM this year was MINExpo International, a quadrennial mining industry event that fills the Las Vegas Convention Center with some of the largest machines in the world. The event encompassed 675,000 sq. ft. (62,709.6 sq. m) of exhibition space, filling 11 halls of the convention center.

Several OEMs and component manufacturers introduced new machines and technology during the show. Electrification and automation were among the biggest areas of focus for many, with the mining industry being one in which both industry trends are of particular interest. Underground mining has been moving toward electrification for several years now to help improve safety for those working within the mines. And mining is an ideal application for autonomous vehicles due to the closed off environment in which the machines operate, as well as the repetitive nature of the work.

For any news you may have missed from the show, as well as mining industry content, our MINExpo channel is still live, so be sure to visit the page for all of the latest mining equipment and technology launches.

After that, the team headed to Louisville for The Utility Expo, formerly known as ICUEE. From September 28-30, manufacturers and suppliers in and related to the utility industry showcased their newest products. Educational sessions were also available for attendees, as well as hands-on demonstrations and an in-person look at the latest equipment.

Read about some of the latest products introduced during The Utility Expo 2021.

And more events are still ahead for our team. Next week, along with our colleagues from ForConstructionPros.com, some of the OEM Off-Highway staff will be attending The ARA Show in Las Vegas, an event dedicated to the rental industry.

Following that, I'll be headed to the Argus Vehicle Emissions and DEF Summit USA (formerly known as the Integer Emissions Summit). This annual event discusses the latest emissions regulations and technologies related to reducing emissions including those for traditional engines as well as advancements in hybrid and electric vehicle systems. Every time I've attended this event I've come back with a wealth of information; stay tuned for updates from this year's event which should prove as informative as years past.

In December, I'll have the opportunity to attend my first military technology event, the Defense Strategies Institute's (DSI) Military Vehicles Summit. At this event I'll have the opportunity to learn about what technologies the military is focusing its development efforts on which could be of interest to our readers, many of whom supply to the market or work directly within it.

As trade shows and other events have begun to come back, there is still some trepidation from companies and attendees about going to them. This was evident at MINExpo and The Utility Expo which were not as heavily attended in years past. However, as we heard from many companies at these events, those who were in attendance were the people companies wanted to speak with, and many were able to have better, more in-depth discussions as there was more time to do so.

Some companies have also felt their time and travel budgets could be utilized in other ways, especially now with the feasibility of virtual events. In April of this year, JLG Industries Inc. announced it would not exhibit or attend bauma 2022, currently slated to take place in October 2022. The company said advancements in technology and a change in people's behavior due to the pandemic prompted the company to re-think how it will interact with the industry. Instead of attending large trade shows, it plans to look at hosting smaller, local events as well as online ones to more easily reach customers around the world.

In early September, Case IH announced its plans to return to trade shows in Europe for the remainder of 2021 and into 2022 to reconnect with customers—while also maintaining a high level of safety, the company said in its press release announcing its return to trade shows. Among the shows it plans to attend are Agritechnica 2022, which is set to take place in February. The company said that while it had organized a digital agricultural fair over this past year to reach customers, it could not replace the face-to-face interactions many of us have become accustomed to over the years. Case IH says this digital fair, known as 'YOUNIVERSE' is a complement to in-person events, and like many other companies and events have been doing, will look at doing hybrid events which allow for both digital and in-person attendance.

This desire for in-person networking is something we've been hearing as our team has gotten back out into the world again, so to speak. And something we've been wanting to get back to, as well. While there is some trepidation due to the current state of the world, there is also excitement at being out seeing those you know again, as well as meeting new contacts.

I have greatly appreciated the digital opportunities that surfaced over this past year for events; they have enabled me to attend much more than I might have otherwise, without having to leave my house. And I think for some types of events, digital offerings will remain and be a viable option. But there is still nothing quite like attending an event in person, seeing new equipment and technologies up close, and having the chance to speak with those in your industry.

To date, there have been no new cancellations or changes to events like we saw throughout 2020 and early 2021, but that could always change. But in the meantime, it will be nice to continuing getting out and seeing firsthand what's been developing in the industry.

Be sure to visit our Events page to stay up to date on all upcoming and future industry events.

What shows will you be attending, or have attended this year? What events are you most looking forward to attending? Do you still see in-person tradeshows as a valuable business tool? Let us know!

Follow us on social media for updates during these and other industry events the OEM team is at!

Events Prepare to Bring Heavy Equipment Industry Together Again in 2021

From the Editor's Desk: How Will Industry Events Evolve in the Coming Years?

Check out the winners and honorable mentions in each of our technology categories.
Lori Ditoro
December 7, 2022
Follow Us