bauma 2022 and NACV 2021 are the latest shows to be postponed due to ongoing uncertainty over the coronavirus pandemic which has lead many organizers of heavy equipment trade shows to postpone or cancel. 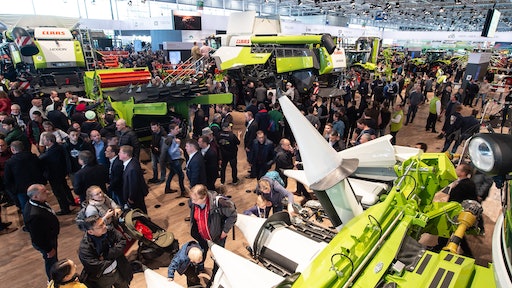 *Editor's Note: This article was originally published on March 29 and updated May 4 with new information.

While some events for the heavy equipment industries are currently planning to take place either in person or virtually—or both in some cases—others are finding it necessary to postpone once again.

Although there have been improvements in the COVID-19 pandemic, there is also still uncertainty regarding it. New waves of infection rates in some parts of the world, including Europe, are a part of this uncertainty.

This is causing some trade show organizers to rethink their initial plans to host in-person events in 2021. Many had postponed their 2020 shows to 2021, and even pushed those shows to late in the year in the hopes there would be enough improvement in the health crisis to hold their events.

Unfortunately, this has not been the case for some. Below is a listing of 2021 trade shows and conferences which have been postponed. We will keep this list up to date as information becomes available.

Organizers of the North American Commercial Vehicle (NACV) Show Newcom Media and Hannover Fairs USA have announced the 2021 edition of the show is postponed. Per a press release from show organizers, the decision was made after discussion with both manufacturers and fleets, who cited the lingering effects of COVID-19 on willingness to travel and attend large gatherings. Additionally, the growing number of events competing with one another in the fall of 2021 also factored into the decision.

“Each organization and individual attendee has made choices over the past months based on a variety of factors, health and safety being the most pressing. While many exhibitors demonstrate commitment to the show and vaccination rates continue to rise, our research shows that the trucking industry will not be ready to attend large events like they traditionally have this fall,” said Ed Nichols, Vice President of Hannover Fairs USA, in the press release.

Organizers say the show will be rescheduled, and details on future plans are expected to be announced in July 2021.

Messe München, organizer of the global trade fair for construction and mining bauma, has announced the 2022 edition of the show will be pushed from its original date in April to October 2022. In its press release announcing the postponement, Messe München said the decision was made after many discussions between it top industry representatives as well as the Advisory Board.

According to the press release, while there is growing optimism in the industry and booking levels for the show were high there were just too many uncertainties still surrounding the global pandemic. It is not clear whether international travel will be possible—which is essential to the success of the show. In addition, it takes a lot of time and investment to set up the show, which is why a decision had to be made now, says Messe München.

"Unfortunately, despite the vaccination campaign that has been launched around the world, it is not yet possible to predict when the pandemic will be largely under control and unlimited worldwide travel will be possible again. This makes participation difficult to plan and calculate for both exhibitors and visitors. Under these circumstances, we would not have been able to fulfill our central promise that bauma, the world's leading trade fair, represents the entire spectrum of the industry and generate international reach like no other comparable event. After all, bauma’s last edition welcomed participants from over 200 countries around the world. Hence, the decision is consistent and logical,” said Klaus Dittrich, Chairman and CEO of Messe München, in the press release announcing the postponement. 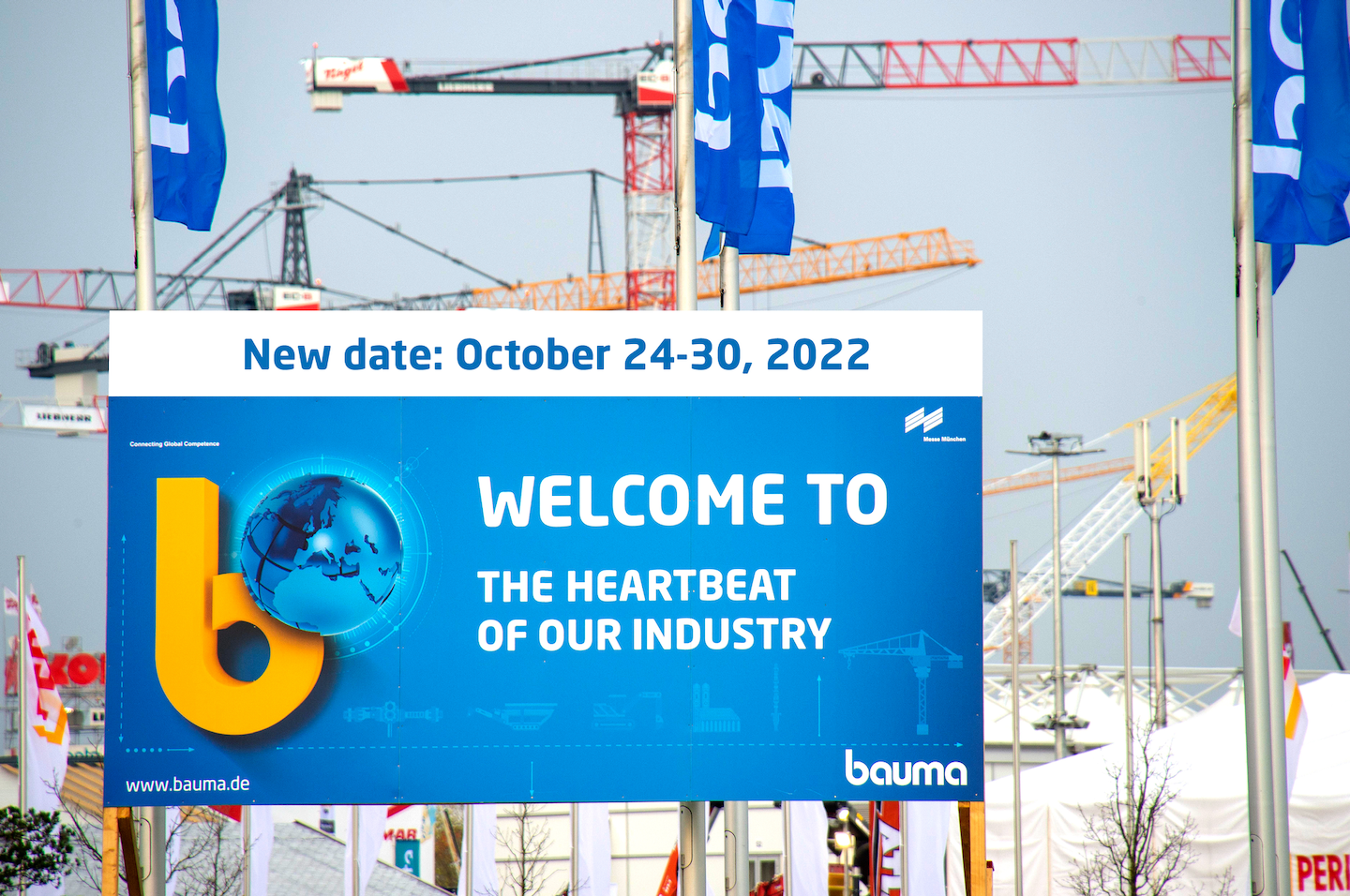 Messe Muenchen South Africa, organizers of bauma CONEXPO AFRICA, have announced the event will not take place in 2021 as planned. Originally scheduled to take place in October, organizers have determined after in-depth consultations with industry stakeholders and continued international travel bans to cancel the show.

Suzette Scheepers, CEO of Messe Muenchen South Africa, said in the organization's press release announcing the cancellation, “Due to the challenges the industry is facing, and uncertainty in the market around the COVID-19 pandemic and associated travel restrictions, the bauma CONEXPO AFRICA advisory board concluded that we could not guarantee the international stature and the usual return on investment of this show in 2021.”

Messe Muenchen says in its press release the industry agrees it needs to focus on economic recovery and revitalization, and that it looks forward to planning the next edition of the show at a future date. 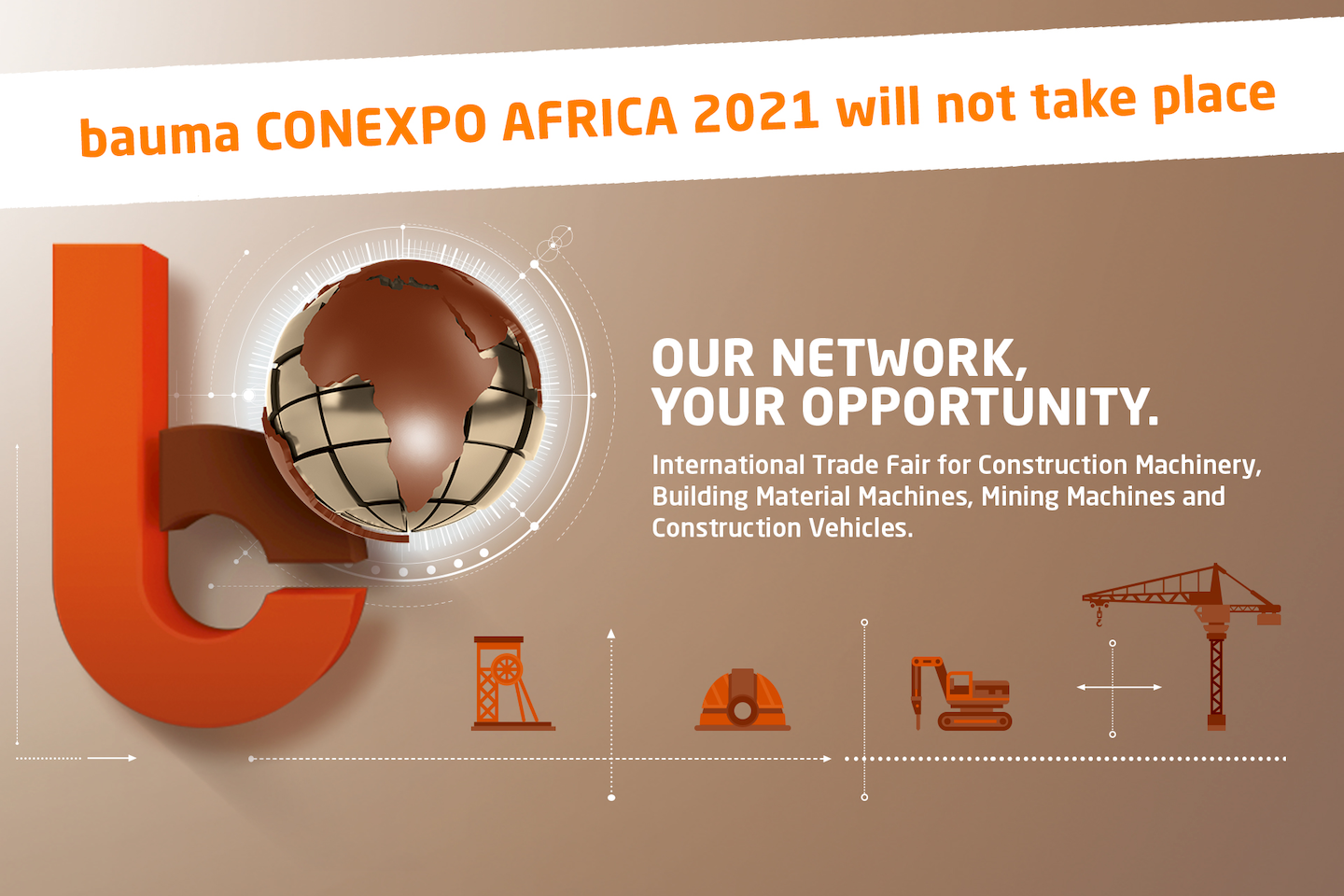 The DLG (German Agricultural Society), organizer of global agricultural equipment trade show Agritechnica has made the decision to postpone the event until March 2022. DLG says in its press release announcing the postponement the decision was made based on the current status of global vaccination rates and the COVID-19 pandemic in Germany, where the show is held, and abroad.

By postponing the show 4 months, DLG says there will be better certainty for it and participating companies to appropriately plan for the event.

“As a world-leading trade fair, Agritechnica is the meeting point for the entire agricultural machinery industry, as well as a leading international business platform. The essential requirements for exhibitors, visitors and business partners to be able to gather again at Agritechnica are vaccine and test strategies that have been put into practice in Germany, Europe and worldwide. Our top priority is to offer exhibitors and visitors certainty in planning but this is not currently the case. As a consequence, the decision to postpone Agritechnica was taken by the DLG in close cooperation with Agritechnica’s exhibitor advisory board and VDMA Agricultural Machinery Association as industry partner,” said Dr. Reinhard Grandke, Chief Executive Officer, DLG. "We are convinced that by late summer, which is the deadline for exhibitors to register for Agritechnica 2022, we will be able to give our exhibitors and visitors the clarity necessary for certainty in their planning."

“For our industry, Agritechnica is and will continue to remain the undisputed flagship in the world of international trade fairs. In close cooperation with the DLG, we have done everything we can to develop a trade fair concept for this autumn that is fit for the pandemic. The third wave of the pandemic is currently in full force. But above all it is the disappointing vaccination policies in the German federal and regional governments, which have unfortunately slowed us down for the time being. We are now looking to spring 2022 with fresh momentum and renewed energy so that we can celebrate an Agritechnica together as we know it and love it," said Anthony van der Ley, Chairman of the VDMA Agricultural Machinery Association, underlining the outstanding position of Agritechnica.

Agritechnica plans to return to the Hanover exhibition grounds February 27-March 5, 2022. DLG will also offer a digital platform for professional and technical information to help strengthen that which is provided by the in-person event; it will begin in November 2021. 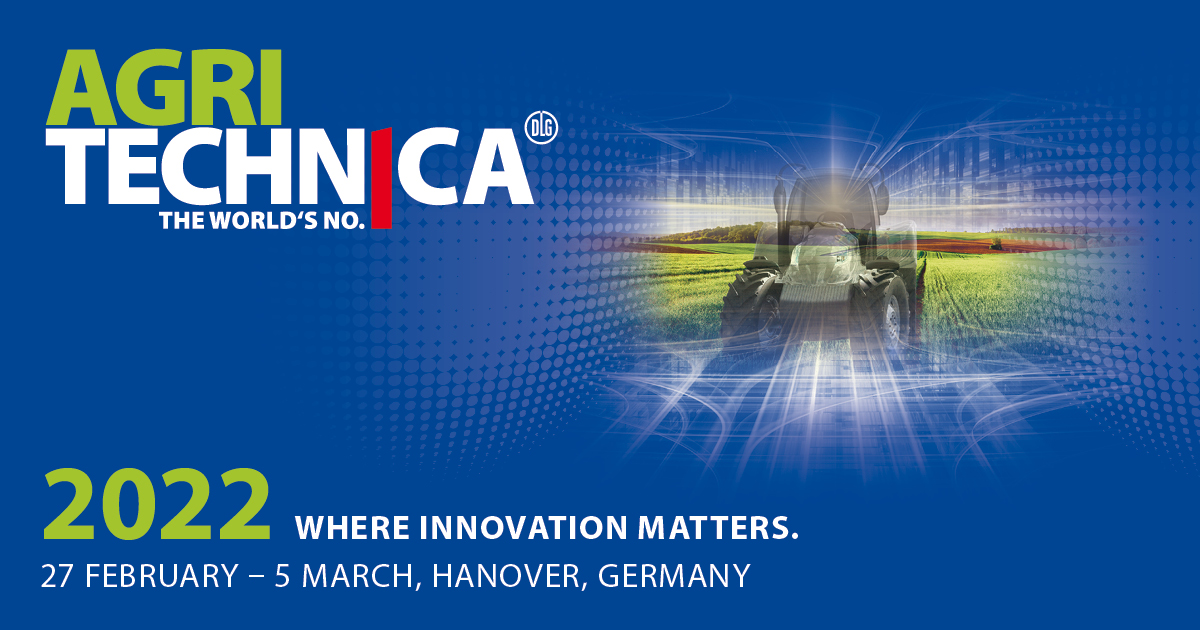 Organizers of the biennial heavy construction and quarrying event Hillhead have chosen to postpone the event until 2022. After a review with the UK government about COVID-19 restrictions and safety measures, organizer QMJ Group has decided to delay the show; it will take place once again June 21-23, 2022.

"Our priority is to provide the Hillhead experience that our exhibitors and visitors have come to expect but, with the continuing uncertainty around travel restrictions and social distancing measures, this is not achievable in 2021," said Hillhead event director Richard Bradbury, in a press release announcing the show's postponement.

"By delaying the show until June 2022, the full benefits of a completed vaccination program will have filtered through, allowing us to deliver a safe and vibrant event," he concluded. 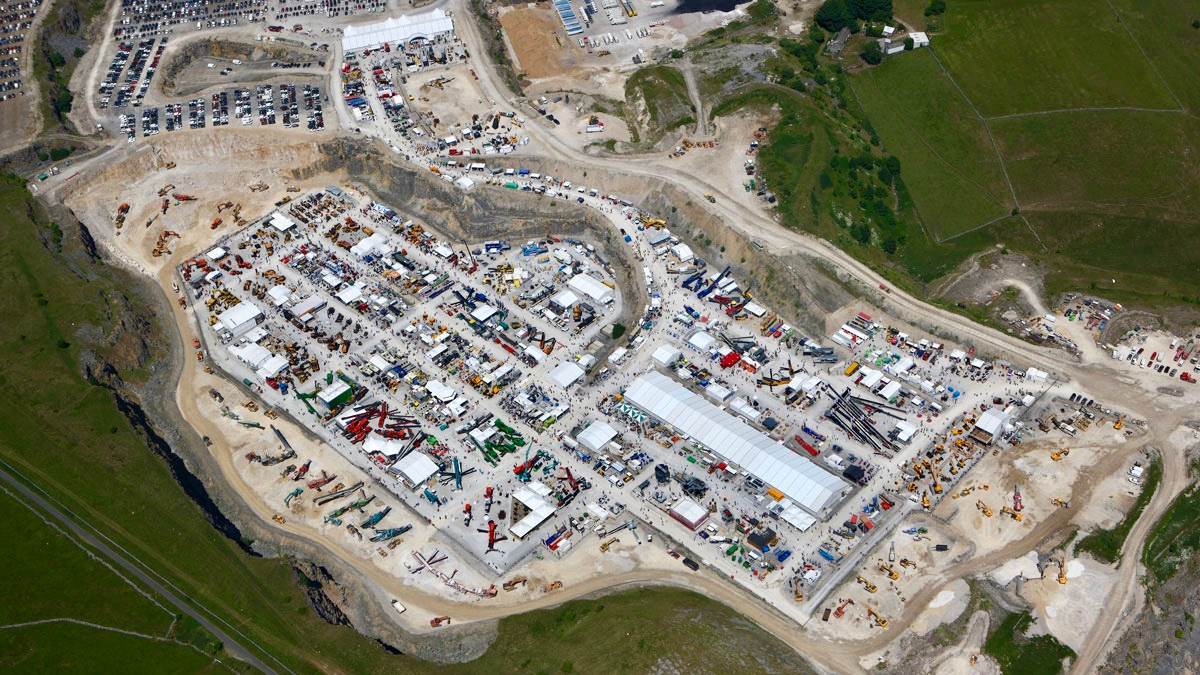 An aerial view of the Hillhead 2018 show grounds.QMJ Group

The organizers of bauma CONEXPO INDIA announced on Feb. 10 the show will not take place in 2021 as originally planned. According to the show organizer's press release, this decision came after much deliberation with stakeholders and an evaluation of the market.

In addition, the decision was based on the industry’s and organizers’ concerns around exhibitors’ ROI, safety protocols and uncertain international participants’ turnout due to travel restrictions. The show had initially been pushed back to April 2021 from its original dates due to ongoing safety concerns related to the coronavirus.

The next edition of the show will take place in 2022 in New Delhi.

Organizers for the triennial event INTERMAT—a construction industry event held every 3 years in rotation with CONEXPO and bauma—have made the decision to cancel the show for 2021. In its press release on the matter, organizers say the decision was made based on the continued uncertainty surrounding COVID-19 which is likely to persist in the first half of the year.

In the release, organizers they could not in full confidence hold the show in April as originally planned and that the decision was made "following consultations with industry professionals convened in the INTERMAT Board of Directors."

The next edition of INTERMAT will take place in 2024 with the goal of making it an even larger event than years past.

Show organizer AEM says the updated branding reflects the growth and momentum of the construction industry and CONEXPO's role in connecting the industry.
Association of Equipment Manufacturers (AEM)
May 5, 2021

OEMs including John Deere, Liebherr and PONSSE are among those honored this year for their innovative machine designs.
Sara Jensen
April 20, 2021

JLG Not Exhibiting at bauma 2022

Webasto and IAV will research the electrification of heavy-duty buses, trucks and machinery, Isuzu is developing and evaluating autonomous trucks and more news you may have missed from the past week.
Sara Jensen
April 7, 2021
Follow Us