FTR Trucking Conditions Index dropped to a reading of 7.8 in January

Despite the drop of FTR's Trucking Conditions Index in January, the index is expected to maintain a high level and continue moving upward. 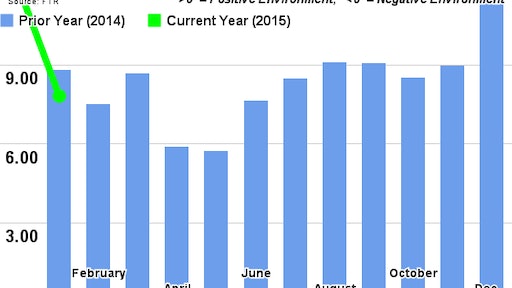 FTR’s Trucking Conditions Index (TCI) for January dropped 34% month-over-month to a reading of 7.8, reflecting positive impacts from continued drops in fuel prices being offset by weaker inputs from freight rates, load growth and capacity. FTR expects the index to maintain a high level and move upward again in late-2015 as the industry begins to anticipate another round of regulatory drag. The Trucking Conditions Index is impacted when capacity utilization or prices change.

Jonathan Starks, FTR’s Director of Transportation Analysis, comments, "Despite the drop in the TCI from December to January, the index remains at a high level and is only slightly below the average score for 2014. A drop was expected since the December TCI spike was caused by the rapid drop in diesel prices. Diesel prices have now bottomed in early February and are beginning to rise slowly, adding 11 cents at the start of March. Diesel’s impact on the TCI will slowly subside in 2015 but stay positive, unless the volatile energy markets jump higher. The Market Demand Index (MDI) from truckstop.com highlights that the capacity situation is much looser than last year but looks to have bottomed recently and has tightened the last three weeks, hitting 16.21 the first week of March. While this is down nearly 40% from the polar vortex-affected 2014 it has jumped nearly 60% from its low in mid-February. I expect capacity to be more available during the spring shipping season since weather has been less disruptive and the HOS rollback has begun being implemented.”