The SXP EVO is a directional valve system developed for front loaders and other lifting applications. 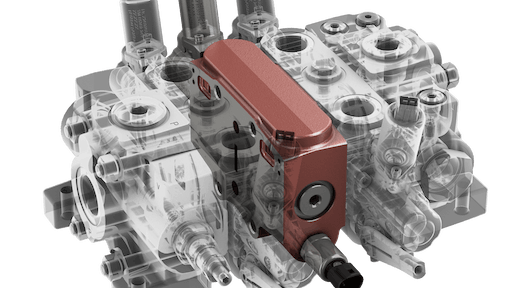 Walvoil SXP EVO, an evolution of the SXP directional valve already awarded as ‘technical news’ at Eima International 2018, is an innovative system developed for front loaders and other lifting applications, that will be introduced to the market at bauma 2019.

The main feature of new Walvoil SXP patented directional valve is the possibility to switch autonomously from Series Circuit to Parallel Circuit only by detecting the pressure of the circuit and managing this parameter together with the information set by the user.

The system increases the efficiency and productivity of the machine because the unconventional series circuit drastically reduces the cycle time; thanks to the uninterrupted switch to the parallel configuration, the maximum load capacity is granted and the operator doesn’t perceive any change in the control of the machine. 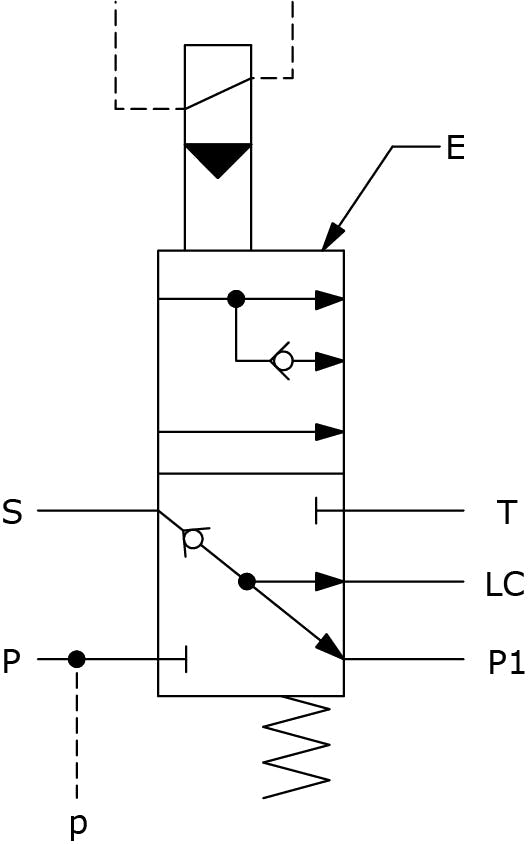 Normal position of the logic element.

The SXP system consists of an E logic element positioned between the boom section and the bucket section of a directional valve.

In normal position the logic element connects the return of the S Arm (ie series) with the supply of the Bucket called P1. At the same time the P pressure channel (ie paralell) is closed, as well as the tank connection through the T-port.

In this status the valve works as a normal SERIES circuit.

The E logic element also allows a second working position, connecting S channel to tank or returning it to free circulation and the simultaneous opening of the P parallel channel towards P1.

In this configuration the valve works as a typical PARALLEL circuit.

The switch of the logic element – core of the SXP EVO system – is possible thanks to an integrated solenoid valve, appropriately managed by the system’s electronics.

The complete system is indeed equipped with a sensor to detect the pressure of the hydraulic circuit and an ECU. This layout enriches the solution created on the valve, offering a high flexibility to the OEM but also to the end user thanks to the possibility of setting and customizing the work mode appropriately.

The work mode can be simply set by selecting it on the control panel.

In the MIXED system the circuit works as series circuit until the pressure sensor detects a pressure value that requires the switching to Parallel configuration.

By selecting the appropriate mode, one could even choose to work with fixed configurations, i.e. exclusively in SERIES or PARALLEL without switching.

Series or Parallel? Both!

The idea of combining the characteristics of two constructively different circuits in a single system stems from a careful analysis of these two systems: the Series circuits allow to increase the speed of the loaders since in the first phase the oil is recovered from the return of the boom and not dissipated to tank.

Furthermore the controlability of the machine is improved since the simultaneous boom and bucket movements are completely controlled and guaranteed even with very different pressure loads.

On the other hand, in Series circuits, in case of simultaneous use, the pressure summation limits the maximum load capacity of the machine. 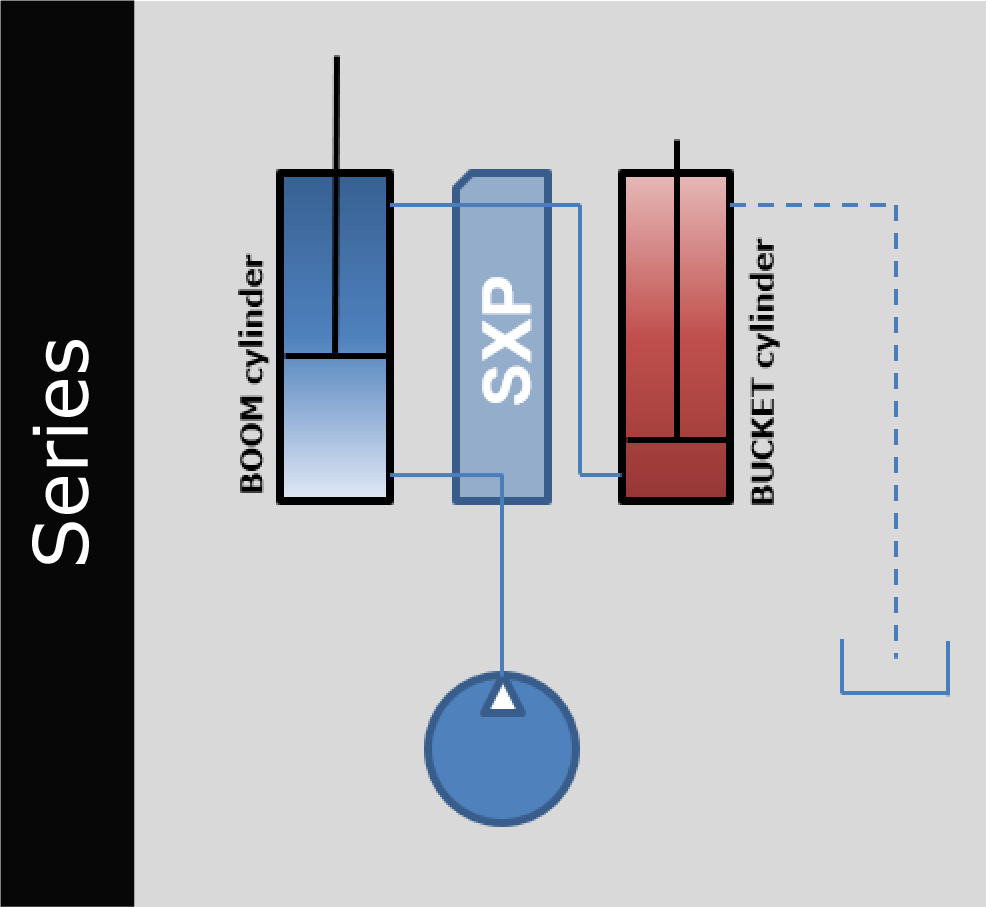 This is the reason why today some OEMs prefer the Parallel circuits in order to maximize the lifting capacity and to avoid the annoying effect of the series circuit: if the cylinders of a function reach their stroke end, also the cylinders of the other function stop.

Clearly these circuits are not free from defects: in case of simultaneous use and depending on the movement and the position of the load, a correct controllability of both movements is not granted.

The innovation is achieved with a simple device which can be inserted as an additional section into Walvoil wide range of valves or it can be totally integrated in a completely new and customized solution with advantages in terms of cost.

The system prototypes have already been manufactured and tested in the field, showing big advantages of this solution: in specific conditions the cycle time of the machine has been reduced by over 20%..

Professional users have confirmed ease of use and working comfort.

The SXP EVO system is completed by a new innovative HJW Heavy Duty Joystick: an electronic joystick, characterized by its robust design. Thanks to its characteristic modularity it can be provided with mechanical or electromagnetic detent, typically used on the Loader application.

Particulary robust and performing, it can be equipped with all the handles and options of Walvoil wide range. It has been set up to communicate with Walvoil control units in order to implement the complete system logic in a simple and efficient solution.

To sum up, the advantages of the SXP EVO patented solution are: 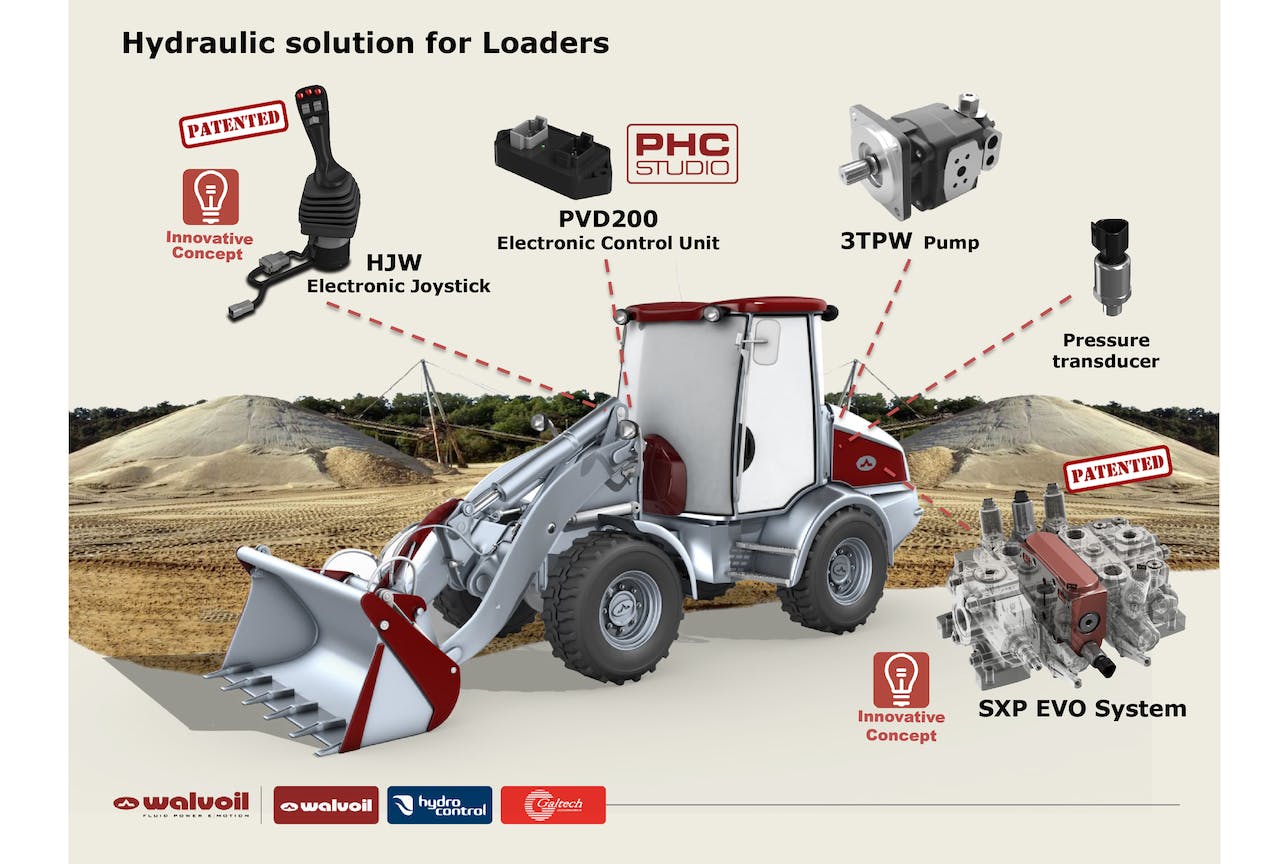 The LM06W is a screw-in, normally closed directional control valve which is leak tight at high pressures.
HYDAC International
December 4, 2020

The DW06V valves enable full pressure to be applied to all ports.
HYDAC International
November 11, 2020

The FDC140 valve drives two cylinders or motors in close unison regardless of individual loads or flow direction.
Webtec
October 27, 2020

The CFS-flat pipe-rupture valve prevents uncontrolled lowering of an actuator in the event of a pipe- or hose-rupture.
Bucher Hydraulics
July 16, 2020

The Bee Valve polypropylene couplers and adapters are chemically resistant to most acids.
Bee Valve Inc.
May 26, 2020